Menu
Facebook-f
Tap to select the previous period
Next

Origin Of The Breed

After the First World War, increased interest developed in South Africa in crossing indigenous sheep, like the Persian and Merino with British mutton breed rams. The precise reasons for this phenomenon is not clear. As a result of circumstances such as the depression, surplus mutton and the slump in wool prices in the early 30’s, the exporting of mutton and lamb received more attention. To the English market the fat-tail type sheep were both strange and new and according to their system of grading not desirable.

A need originates for a fairly good mutton sheep which could produce fast growing lambs on veld conditions with a good quality carcass. In the Western Cape, a prerequisite was that the ewes must be rutting in November-December in order to lamb from April. In the Karoo areas, the aim was to replace the fat-tail types with a breed with a more acceptable carcass. The initial need was to produce a sheep breed suitable to the demanding low rainfall areas of the Northern Province. A relatively easy care sheep with an acceptable meat carcass had to be found for these difficult circumstances.

The Dorper sheep was developed in the 1930’s by the Department of Agriculture of South Africa when they did a crossing with a Dorset Horn Ram and Blackhead Persian ewes.

The most important characteristics required for the breed were probably the following:

With this goal in mind, co-operative experiments were done by farmers on a small scale in the Karoo. Due to the outstandingperformance of the Blackhead Persian, especially under harsh environmental conditions. This breed was selected as the mothebreed.

The Dorset Horn was selected for it demonstrated a longer breeding season in comparison to other British sheep breeds.

The officials at Grootfontein (main research center for the Karoo areas) wanted to determine the merit of the different cross-breeding. The following was suggested: The testing of pure bred rams of different British mutton breeds on indigenous fat-tail breeds. 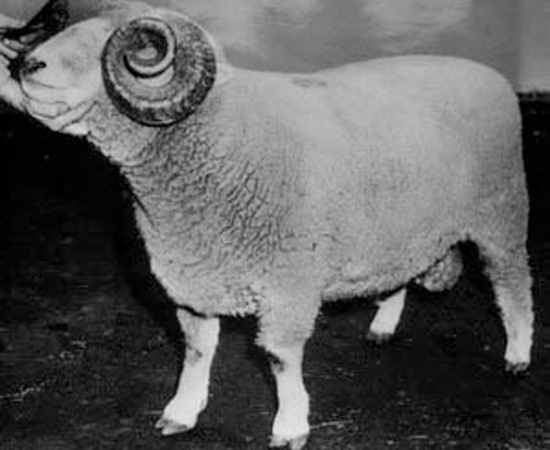 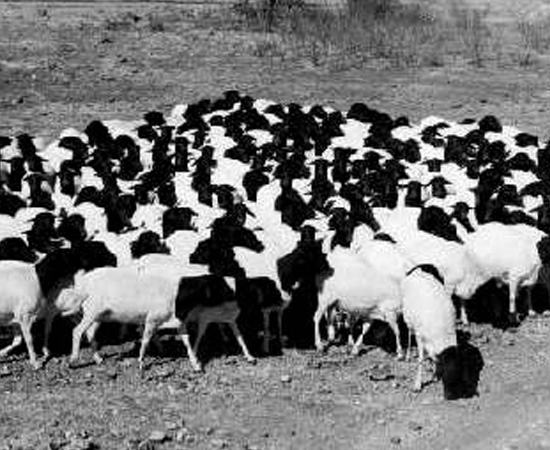 Later ¼ and 3/8 cross were added and the Round-ribbed Afrikaner was also involved. Eventually in 1942, after some co-operators joined the so-called half-cross rani scheme and switched to the mating of F1-half-cross x F1-half-cross Dorset-Persian to produce F2-half-cross individuals. The following co-operators, namely R.Y. Edmeades, W.B. Ludick, W.A. Stahl, D.J de Smidt (and his son H.C. de Smidt) worked successfully with Dorset Horn crosses on their farms and contributed a lot to the establishment of the Dorper breed as such.

As the Dorper was developed on their farms under the guidance of D.J Engela, these people devoted a lifetime’s work to the project and not always under easy circumstances. Through trial and tribulations Engela decided in 1942 that Edmeades should strive to a half-cross Dorset x Persian. At that stage Edmeades did not have mature half-cross rams available but he had quite a few ¾ bred on which he was previously concentrating.

Engela selected two half-cross (Dorset x Persian) rams from the flock of Stahl to be used by Edmeades. They were received in September 1942 but not put to work immediately although from then on he was concentrating on a half-cross Dorset x Persian. He mated his ¾ cross DP rams the following mating season with Persian and 3/8 cross DP ewes. The ¾ cross and 7/8 cross DP ewes and also some Persian ewes were mated to a Dorset Horn ram. 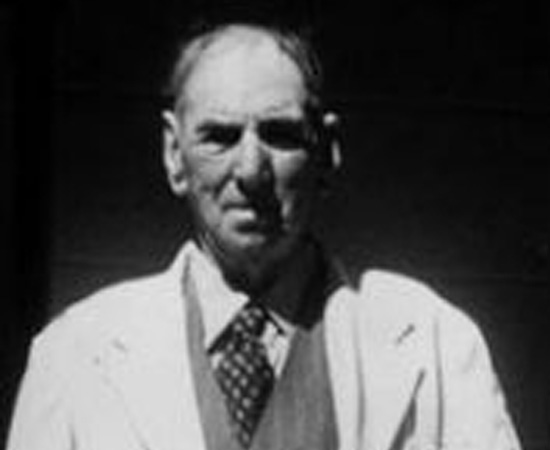 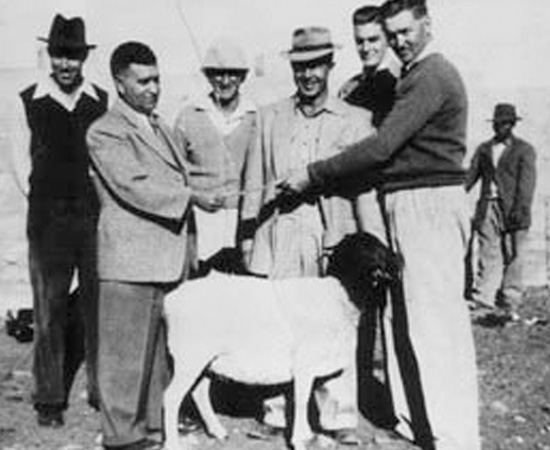 The "Dorper" is born

In 1947 Edmeades at last decided to attach the name “DORPER” to his new stud. On 21st May 1946, 1000 half-cross Dorset x Persian ewes were inspected on his farm and 82 x F2 and F3 ewes were selected as well as 2 x F2 rams and 1 x F3 ram as foundation stock for the Rye Dorper Stud. Another 200 ewes and six rams were selected as “selected flock”. Unfortunately, no records were kept of the stud ewes and lambs but Edmeades was so pleased with the results that he decided to sell all his pure bred Dorset Horn rams. From here on, again under the guidance of Engela and in co-operation with Edmeades a proper record system was developed, a pointing system and breed standards came from more research by keen farmers and officials like S.W Bosman who followed Engela. 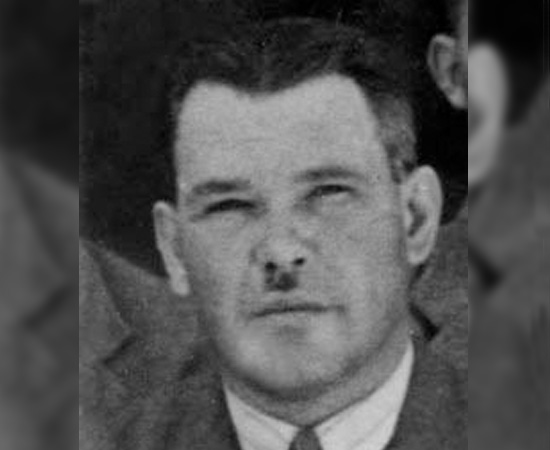 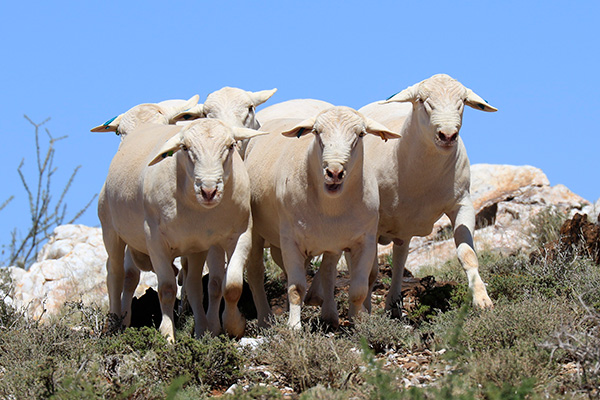 The person who played the most important role in the development of the White Dorper was G. Colerous who farmed near Grootfontein Agricultural College. He did not act as a co-operator but kept close contact with Grootfontein officials. His Merinos had a low lambing percentage under his veld circumstances and he became interested in mutton sheep. He bought Persians and also two Dorset Horn rams of outstanding quality which were imported from Australia during 1937.

The first crosses between Persian and Dorset Horn were mostly spotted but there were also white lambs. He mated 12 (white) half-cross Dorset x Persian rams with his Merino ewes and produced quarter-cross Dorset lambs (1/4 DH : ¼ BP : ½ Merino). Thus, he became a Dorset x Persian (Dorper) breeder but he concentrated on the white variation. In later experiments, Dorset Horn x Van Rooy cross-breeding was also done and the Dorper was also built up partially by this cross-breeding.

In the early stages, there was quite an argument about the name. Rous wanted to call his breed the Dorsian, while Engela favoured the name Dorper. Eventually, in 1964 the two Societies amalgamated and by explanation of F.N. Bonsma that these sheep actually carried exactly the same genes, the name Dorper was accepted and acknowledged as such by Stud Book. Exactly the same breed standards are applied to both Blackhead Dorper and White Dorper except regarding colour and pigmentation.

Research on the Dorper continued and on 19 July 1950, The Dorper Breeders Society was formed by 28 farmers and 11 officials. A score card was developed with the following traits in order of importance: 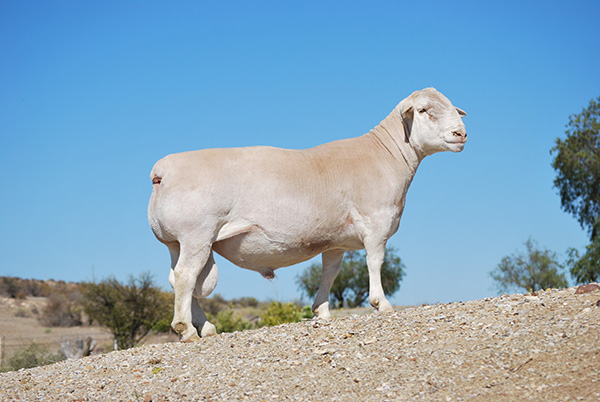 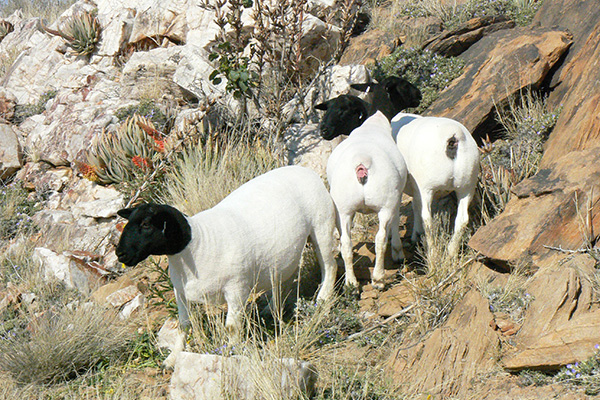 The early Dorpers were white with black spots/patches all over the body. During 1957, this aspect received a lot of attention and discussion. The outflow of this was the even colour distribution of today’s Dorpers.

The number of breeders increased steadily over the years to a peak of 910 members during 1984/1985. Currently, there are 600 breeders represented by 10 clubs in the various parts of South Africa and Namibia. According to Marais and Schoeman (1990), the Dorpers grew from 2.6 million in 1963/64 to 6.6 million in 1990. The estimated number of Dorpers in South Africa is currently over 5 million.

The first National Dorper show was held at Hopetown during 1955. Since then it grew to one of the biggest small stock shows in the world. From 1988 until 1998 more than 1000 animals competed for the different prizes. Regional and club shows are held on an annual basis all over South Africa. Since 2002 a World Championship Show takes place every second year in South Africa.

From this humble beginning, the breed proved itself as a hardy mutton sheep with a top quality carcass at a relative early age. This progress can only be contributed to the many people who truly loved and believed in the success of the breed. The breed is now in the hands of the current generation and they can further develop the breed by applying what they have learned from the past, but also the overcome the challenges of the future. 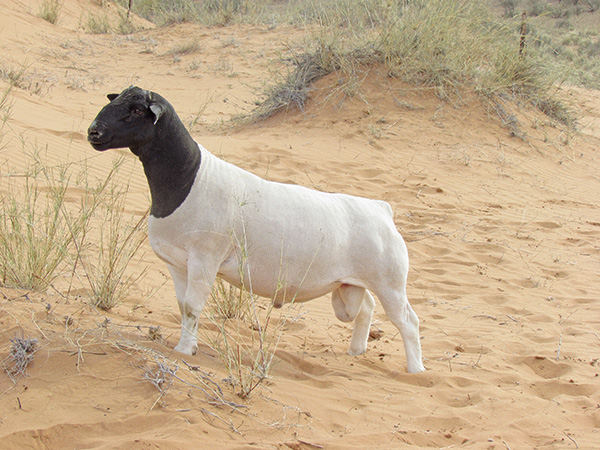